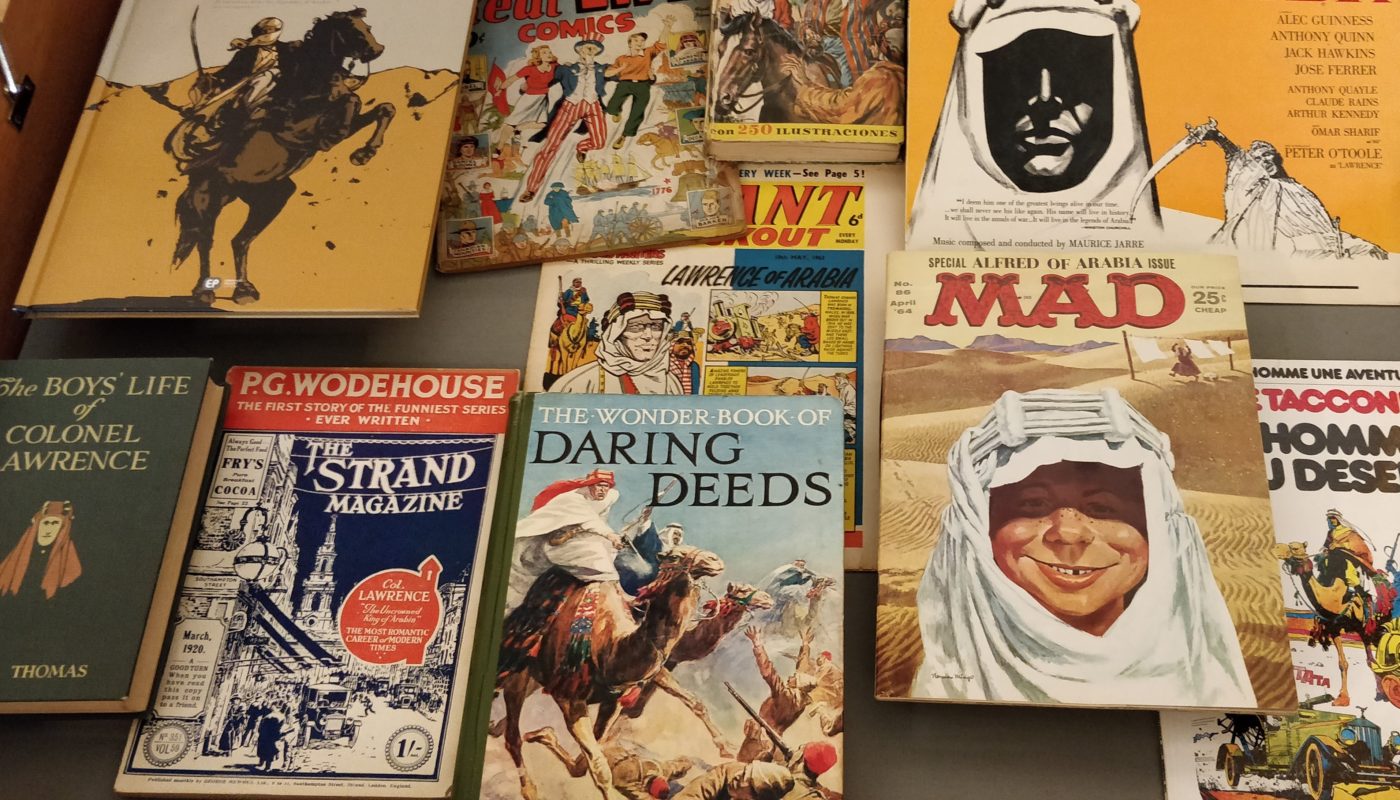 As his fame grew in the 1920s, T.E. Lawrence shied away from the intense publicity – “backing into the limelight”.

His celebrity status had already grown throughout the First World War and would be skyrocketed thanks to a young filmmaker. In 1917, Lowell Thomas set out from Chicago to the Western Front to document the Great War in the hope of finding inspiring material for his ‘travelogues’ for an American audience. Upon arrival, however, he found that the trenches of the Front were desolate and provided little for a newsreel of inspiration. He travelled on to Italy, and finally to Palestine in hopes of documenting General Allenby’s campaign against the Ottoman Empire. Here he found the footage he was in search of, with Allenby and with Lawrence.

Lowell Thomas’s footage of Lawrence and Allenby is the first motion picture footage of the Arab Revolt, and Thomas knew he had captured something his viewers back home would see as dramatic and exotic, something that would captivate the world. Thomas crafted a theatre show, a multi-media presentation entitled “With Allenby in Palestine and Lawrence in Arabia” which opened at Covent Garden in August 1919. The theatre was filled with incense braziers, exotically dressed women, the band of the Welsh Guards, and an Irish tenor singing the aazaan set to Western music. Thomas introduced his film which was set to dramatic music and narrated throughout.

The new show, the “travelogue”, was an immediate success, and was soon franchised and appeared in theatres all over Great Britain and the United States of America. A poster advertising the show can be seen above right (click to enlarge). It is estimated that over four million people saw “With Lawrence in Arabia”. Lawrence saw the show in London, and even helped Thomas by sitting for staged photographs. 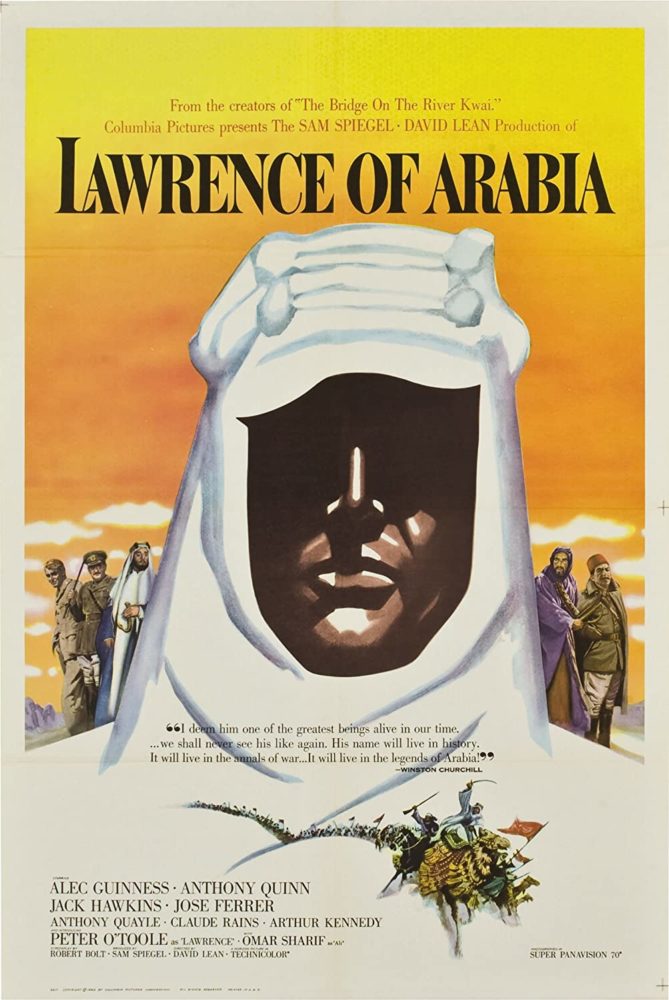 The image of Lawrence of Arabia has had a sustained life since Lowell Thomas’s creation in 1919. “In 1914 Lawrence was barely twenty-six, known only to Oxford and the small circle of his friends”, wrote Lord Halifax, “when the war ended, his name was on the lips of all the world.” Thomas’s film, and later book, and then Lawrence’s own Seven Pillars of Wisdom would propel his name and his actions to an ever wider audience.

This fame, however, did not sit easily with Lawrence. To escape the intense publicity, he eventually changed his name, twice, first enlisting in the Royal Air Force under the name John Hume Ross in 1922, and then in 1923 he joined the Royal Tank Corps under the name T. E. Shaw. Whilst working for the military in Bovington, Dorset, he first rented and then bought a small forester’s cottage, named Cloud’s Hill. This small, poorly-insulated cottage – only consisting of three rooms – became a place of refuge for Lawrence. He described it as an ‘earthly paradise’, writing:

Nothing in Clouds Hill is to be a care upon the world. While I have it there shall be nothing exquisite or unique in it. Nothing to anchor me.’

In 1925, he threw himself back into work for the RAF, where he eventually became a speed-boat mechanic until completing his enlistment in March 1935. Clouds Hill did not ease his troubles completely though. He succumbed to injuries sustained from a motorcycle crash near his beloved cottage on 19 May 1935.

As a result of his high-profile crash, Lawrence’s fame only increased further after his death. The character and story of Lawrence of Arabia would appear in comics and boys’ own adventures in the 1940s and 50s. You can see a selection of these above, all taken from the Lawrence collection at Magdalen College Library. Generations of children grew up thinking Lawrence of Arabia to be a hero, in stark contrast to Lawrence’s own opinion of his exploits. Later, in the 1960s, David Lean’s epic film adaptation, Lawrence of Arabia (1962), would then establish Lawrence’s legend for a new generation. Extremely popular since its debut (winning seven Oscars), its popularity has only grown since then and is now regarded as one of the most influential films ever made. Lawrence’s fame could not be contained and he is still a recognisable figure today, almost a century after his death. 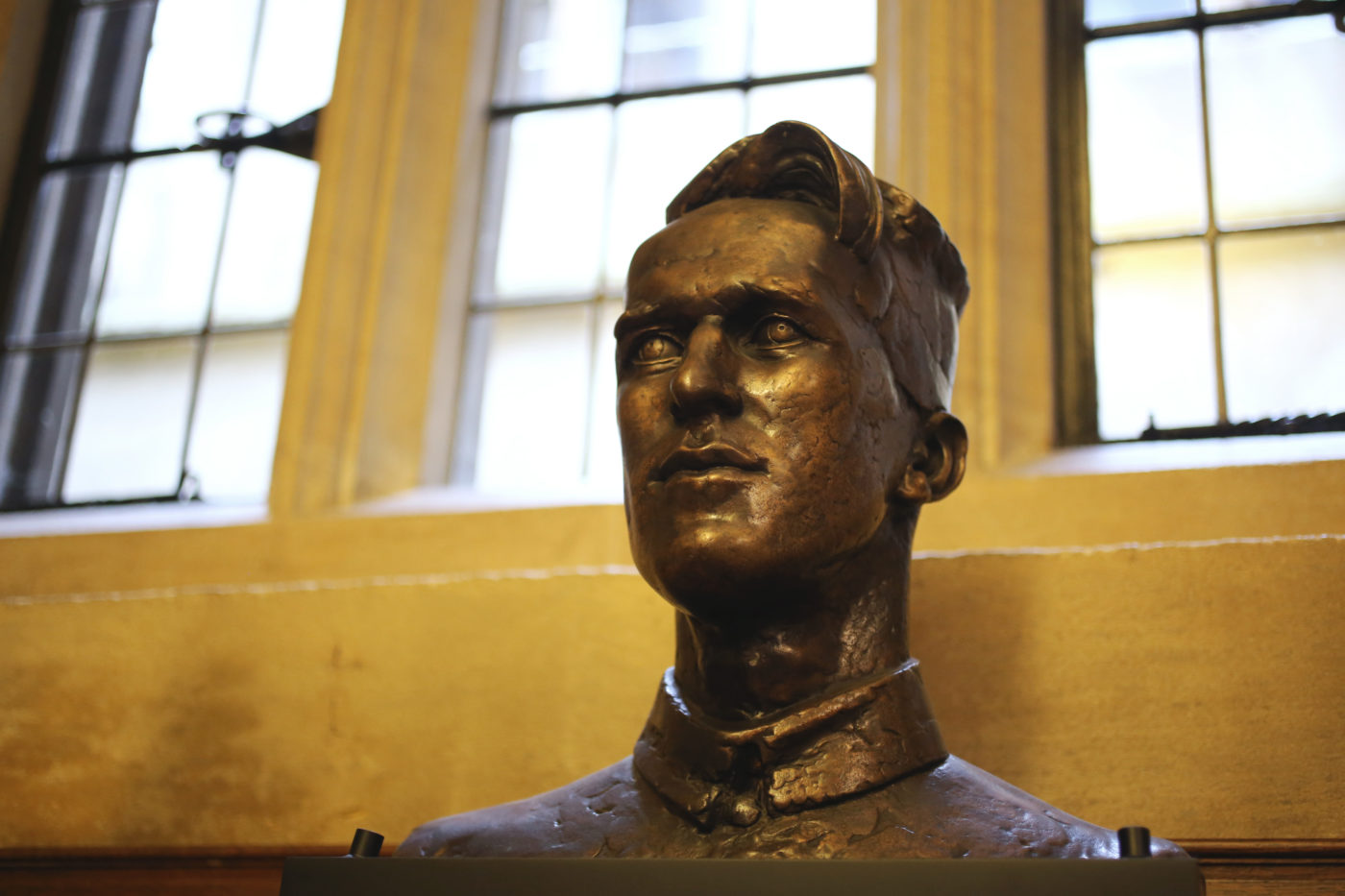 As we have seen, Lawrence’s story captured the imagination of thousands the world over. Oxford and Magdalen were by no means immune from this sustained interest in his life. After the war, Oxford educated the most prolific and influential explorers/authors of the second half of the 20th century who would take Lawrence as their inspiration, including Wilfred Thesiger, Gavin Maxwell, Peter Fleming, and Gavin Young.

Wilfred Thesiger has to be the Magdalen student that was most influenced by Lawrence. Thesiger came up from Eton to Magdalen in 1930 to read History, but found the world of Oxford to be even more frustrating than boarding school. Thesiger took up boxing, for which he was awarded a Blue (an athletic scholarship) each year, becoming the team captain in 1933. Although he only managed a Third in History, Thesiger found his inspiration in the literary world swirling around Oxford. Thesiger was a regular guest at Elsfield Manor, the home of The 39 Steps author John Buchan, and missed his idol, Lawrence, by minutes on one visit. “I should have liked to have met him,” he said in an interview a year before his death in 2003, “more than anyone else.” Thesiger left Oxford to return to Abyssinia, to set out on his first of many adventures “highly impressionable and incurably romantic.”

After the Second World War, Thesiger began his journeys in earnest across eastern Africa and Arabia. His two most famous books recount his travels during two different periods in his life.  Arabian Sands chronicles his journeys through the Empty Quarter of Arabia between 1945-1950. Marsh Arabs, instead, offers a narrative of the walk that he and fellow Oxford traveller Gavin Maxwell took through the marshlands of southern Iraq and their meeting of the Madan Marsh Arabs. Both books (in fact all of Thesiger’s many books) are illustrated with his photography; he was a photography enthusiast, amassing over 38,000 negatives in his time travelling before offering them to the Pitts Rivers Museum in Oxford.

Thesiger clearly followed in Lawrence’s footsteps. The group of four medals pictured below mark the achievements of one of the greatest British travellers of the 20th century – no other explorer has received all four medals displayed here. Thesiger travelled far and wide and spent much of his life until the early 1990s exploring eastern Africa and Arabia. Click on the dots to discover more: 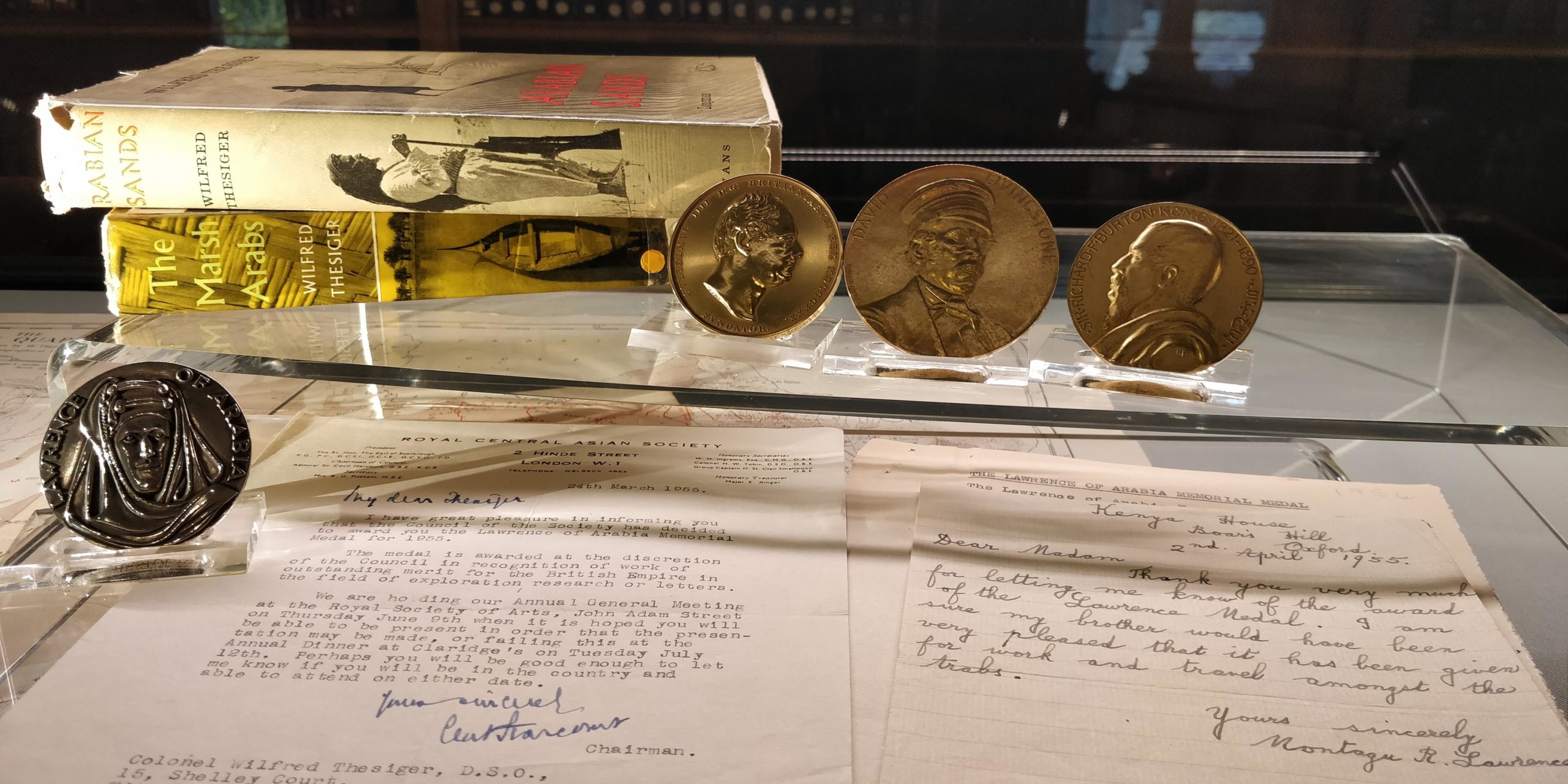 The Lawrence of Oxford catalogue, available for purchase from the Home Bursary.

More recently, interest in T. E. Lawrence at Magdalen has continued to grow. Both the college library and archives have drastically increased their collections relating to Lawrence, many of which have been showcased on this site. In 2018-19, the library celebrated his legacy in an exhibition entitled Lawrence of Oxford. The text for these tabs has been based on this widely-acclaimed exhibition. If you are interested in reading more about Lawrence’s life and his connection to Magdalen, copies of the exhibition catalogue can be bought from the Home Bursary (pictured right). Email celia.brown@magd.ox.ac.uk to purchase a copy.

We hope you have enjoyed reading this online exhibition. T. E. Lawrence’s life and deeds still captivate, still challenge the idea of a modern-day hero. His story is one of extreme hardships, of public scrutiny, and of unfulfilled dreams. He and his legend have inspired generations of authors artists, soldiers, and academics , both at Magdalen and wider afield. On the next few tabs of this site, you can read more about two figures intimately connected to Lawrence whose archives are now held at Magdalen College – D.G. Hogarth and Jeremy Wilson.

Lawrence and the Middle East